Pro Hart was born in Broken Hill, where the mining backdrop of the town and the colourful atmosphere inspired his work.

His art is displayed in collections around the world, including those of Prince Phillip and Lyndon Johnson and on permanent display at the National Gallery of Australia; Canberra, State Gallery; Hobart, Sydney Opera House, White House Collection; Washington D.C and the Warsaw National Gallery.

In 1976 he was awarded an MBE for his service to art in Australia and in 1982 received Honorary Life Membership of the Society International Artistique for outstanding artistic achievement.

d’Arcy Doyle, one of nine children, grew up in Ipswich at a time when the great depression created poverty and hardship.

His childhood surrounds, including the Jacarandas and neighbourhood, were to feature in some of his most iconic works.

Doyle’s artistic talent began to shine through as a 13-year-old schoolboy when he began to take notice of the town’s sign writers, whom he would spend hours studying.

Doyle joined the navy at 18 years, where he was able to further his love of painting and sport. In the early 1960s, he gave up his job as a master painter and sign writer, beginning his career as a full-time professional artist.

Today, as many as one in 40 homes in Australia has a Doyle print on the wall.

He is now recognised as the quintessential Australian artist, his paintings creating a nostalgic look back at life in the good old days, when time seemed to move at a slower pace and the simple things in life were what mattered.

Darryl Trott is the renowned floral artist with a gift for capturing the fragile beauty of live blooms and gardens. Throughout his career as a painter he worked in five continents earning international recognition.

Whether painting roses in England or hibiscus in Tahiti, his art gives the impression one can reach out and touch the flowers, which are always the feature, never the backdrop.

At times, people have expressed surprise his watercolours could be so colourful, to which his reply is well documented:


"Colour and strength have nothing to do with watercolour. It is how you, as an artist interpret the medium. People tend to categorise watercolour as soft and anaemic, they emphasize the water and not the colour. Water is just a vehicle. When it dries, all you have got is the colour. Besides, watercolour is the perfect medium for flowers. Consider the delicate edges of my flowers; they could never be that paper like in oils.”

Darryl Trott's paintings are on exhibition in private collections and galleries throughout the US, Hawaii and Australia. 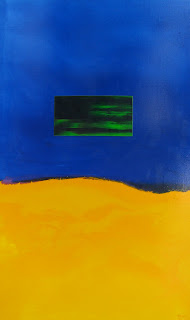 Impressionist painter Dean Vella's journey as a professional artist began in his hometown of Broken Hill in outback Australia following his graduation from the Broken Hill Technical College in 1978. His work draws on this desert landscape and the vibrant surrounds of his current home in tropical north Queensland through their use of bold and bright colours and sense of space. Flowers, tropical fish and native birds often feature in his pieces. "The bright colours are the result of my observations of nature; in reality they are not exaggerated, but true to life,'' he says.

His first major sell-out solo exhibition was held in Sydney in 1995, followed by his first international exhibition the following year. In 1997, Vella was invited by the Chinese Government to exhibit his work in China. In 1998, his painting "Wind in the Willows" became the first western painting ever placed in the vast collection of the Guangdon Museum of Art in China. Vella's works have since been exhibited in the US and hang in private and corporate collections in 19 different countries. In 1999, Vella was voted one of Australia's top 100 artists by Australian Art Collector magazine. Asked to describe his work, he says: "Art has no rules, colour has no boundaries." 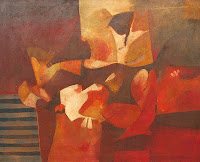 Kempf studies at the National Gallery Art School from 1948-49. He has worked in London, Austria and Italy, also studying at the Academy of Fine Arts at Perugia, Italy with Austrian artist, poet and playwright Oscar Kokoshka in the late 1950s. Kempf has played an active role in the South Australian art industry and contributed to art studies abroad, guest lecturing at Slade School in London.

Kempf has held solo and group shows overseas and in Australia between 1964 and 1981, including at the Smithsonian Institute in Washington DC. His works are held in Australian galleries and public collections in Israel.